Someone actually said they wanted a copy of our week’s meal plan. Once my ego got over the flattery, I thought, “Why not type it up and see if anyone benefits? Worst case, it’ll be a nice resource to go back to if we’re ever hungry for that thing we had three weeks ago.”

This plan includes 6 dinners, 1 breakfast and 1 bakery item. That’s not a hard-and-fast weekly rule, but maybe it should be. 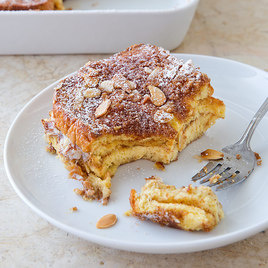 French Toast Casserole – specifically, this one from Cook’s Country, Feb/March 2015