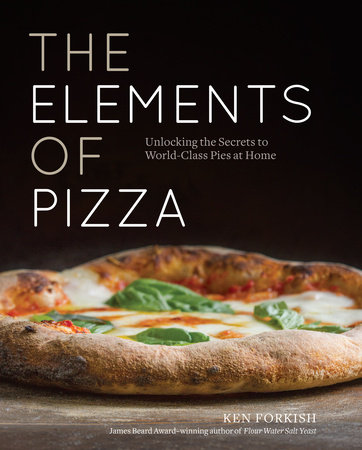 Since receiving this book, it’s the only way we make pizza.

When we wanted to have pizza for dinner, we used to use a pre-mixed refrigerated dough from a local bakery. I’d throw some jarred pizza sauce on top, along with some shredded cheese and some toppings. It usually turned out pretty good. Not amazing, but better than frozen and better than the big chain delivery places. Once in a while, I even experimented with pizza dough recipes from cookbooks and the like.

Then, I met The Elements of Pizza book. I won’t go so far as to say that it’s changed my life, but it sure has changed the way we make pizza.

If I plan far enough ahead, I’ll make the 48-to-72 hour pizza dough. It’s awesome. If I fall behind a day, I’ll make the 24-to-72 hour dough. If I want pizza today, I’ll go with Saturday pizza dough, or Saturday pan pizza dough. These recipes all have the same ingredients, but the quantities change, and most importantly, there’s a different technique with each. Most importantly, they’re all delicious. And the recipes are impeccably organized and easy to follow.

Of particular note, I want to point out that here, like he did in his previous mostly-bread-oriented dough book Flour Water Salt Yeast, that Forkish includes recipe header information in a way that I appreciate immensely as a planner. Each recipe header clearly states how much dough it makes, the separate times for first and second fermentations, the time to divide and shape the dough, and then, most super awesomely helpful of all? A sample schedule. It’s so brilliant. If I want pizza on Saturday, tell me what day of the week I need to get this dough started, and then let me know the wiggle room. No more starting the recipe (after only skimming the steps) and discovering the dreaded Step 6: Place dough in refrigerator to rise for 12 hours. Nooooooo! That doesn’t happen here. If I need to start the dough 2 days early, Ken tells me to. This I am thankful for.

But, I’m getting ahead of myself. Let’s go back to the beginning.

The book has 7 chapters. The first five take up the first 100 pages of the book. They cover Ken’s pizza philosophy, his training, his experimentation, as well as the requisite chapters on equipment, methods, and ingredients. I found these all to be informative and interesting.

Chapter 6 contains 12 pizza dough recipes, including one that is gluten-free.

Chapter 7 encapsulates the final 100 pages of the book and includes 5 pizza sauce recipes and 37 pizza recipes. I have tried 3 of the sauce recipes and I adore them for their simplicity as much as their wonderful flavor. On the pizza side, I’ve made the Grandma Pie in both thick and thin crust versions (thick is quite bready, thin is our favorite), New York Cheese Pizza, Prosciutto Pizza, Pizza Margherita, Vodka Sauce and Sausage Pizza and multiple variants inspired by the recipes here. Most recently, I followed along with the Pepperoni, Mushroom and Onion Pizza recipe, including the parbaking steps. I parbaked 5 crusts. We ate two for dinner and froze the other three. Last week, I defrosted those three on the countertop while preheating the oven. My daughter and I then topped them with sauce, cheese and a few toppings and a mere 5 minutes in the oven later and we had delicious pizza on the table.

We used this same technique for our daughter’s 4th birthday party, parbaking pan pizza crusts before the guests arrived and then churning out pizzas quickly to feed our crowd of guests. I wish I had written down all the feedback about the pizza I received that day. It probably could have served as this entire review. A few standout quotes:

“This is the best pizza I’ve ever had”
“Can I get this recipe?”
“I didn’t even realize you could make your own pizza crust. This was wonderful”

I’ll also note that the pictures in this cookbook are well-done (and many of them are now dusted with stray flour) and complement the overall presentation here.

Bottom line: If you’ve been on the hunt for pizza dough and sauce that you can make at home, I’ve got just the book for you.